We are pleased to announce that the Cadet Winton event has returned to its traditional format of fencing over 2 days with an overnight stay for the fencers at Millfield School. It will take place over the weekend of 17/18 December, and Welsh Fencing have selected the following fencers for this event:

Welsh Fencing are pleased to announce the following team selections for the Senior Winton Cup being held in Nottingham, over the weekend of 9th/10th July.

This is the 70th anniversary of the event, and the organisers are currently looking at a buffet and bar on campus that would occur on the evening of the 9th shortly after fencing finishes for the day. Full details will be released when we have them, but we have been asked to confirm our team's interest in such a celebratory meal.  Once the team has been finalised, we will qauge interest using teamo.

The team has been nominated & accepted over teamo.

The Senior Winton Cup, 2019, will be held in Nottingham over the weekend of 7/8 July, 2019.  Wales traditionally use this as a development event, so select a team including a combination of both senior fencers and development fencers.  The Wales team can be found below:

Please find below the Wales Team selected for the Cadet Winton Cup 2018, to be held in Millfield School on Saturday/Sunday 15th/16th December: 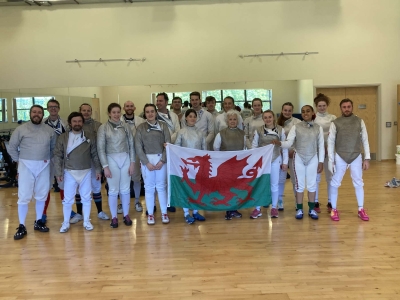 In a very hot Nottingham there was real excitement in the room as old friends were reacquainted, faced each other on the piste, danced the night away in Nottingham night clubs, and came to slightly regret it in the morning!

Please find below the Wales Regional Team selected for the Senior Winton 2018: